65 year old male came with complaint of 1 episode of seizure which was preceded by aura which included ...nausea. Chief Complaints Seizure Chest pain Nausea History He was apparently normal till yesterday night.He was resting after dinner.He suddenly developed chest discomfort and lost concuisness and collapsed. His bystander reports an episode of vomiting followed by stiffening if body,tongue bite,vomiting,. He was then taken to nearby hospital, where CT head was taken and found gliotic changes in left occipital lobe. He was given INJ.PHENYTOIN 750 mg .........then referred to a tertiary care centre. Trop I levels were fiund to be 29.9 ng/mL PEARL( +) Muscle power: 3/5 in Left upper limb. 4/5 in remaining limbs. Muscle Tone: Normal Reflexes: Knee jerk (+),Plantar is bilaterally flexor. Today early morning the patient developed Ventricular tachycardia (HR=186/minute,BP=90/60mmHg, SpO2= 93%).…....Patient was sedated with MIDAZOLAM and DC shock was given along with IV fluids..,....HR stabilised to 66/minute,BP lowered to 120/60 mmHg and SpO2 becomes 100% with O2 5L/minute. 30 minutes later he developed Ventricular tachyarrhythmia,.......ongoing FOSPHEN was then withdrawn. Patient is currently stable. HR= 55 bpm RR= 20/minute SpO2=100% with O2 5L/minute. He gives history of similar episodes 22 years ago....total 3 similar episodes with an interval of 3 years in between.He was hospitalised during each episode and he was discharged each time after he had improved clinically and symptomatically He is a smoker for the past 47 years. He had a surgery for Inguinal hernia 38 years ago He also reports a surgucal history of excision of a swelling over the skin of mandible 38 years ago. O/E: Inspiratory wheeze heared over both lung fields. Kindly evaluate the Attached X ray and ECG and give your valuable opinion about the case. Investigations Chest X ray ECG Diagnosis GTCS,, 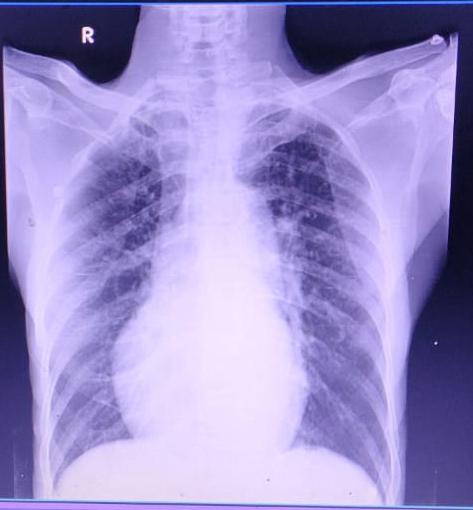 Presented with chest discomfort followed by loss of conciousness.Also mentioned vomiting followed by stiffness in the body.Vomiting before becoming unconcious ,is it so?.Cardiac arrhythmia can produce the same presentation ,small emboli going to brain . Epileptic aura can produce abdominal discomfort with vomiting followed by loss of conciousness.At this stage ,it is difficult to say regarding epileptic aura,most probably Cardiac arrhythmia has to exclude. Also mentioned gr 3/ 5 power in the left side,embolic stroke alao can produce seizure with weakness.Post ictal weakness also can occur after a CPE. Do an EEg,if the EEG is abnormal only to put regular antiepileptic. Get the opinion from the cardiologist . He developed ventricular tachycardia after phenytoin probably phenytoin related vs primary cardiac problem.Any way pt needs cardiac work up.

Thanks a lot Ma'am for your valuable advice.

ECGand Xray not uploaded Cardiac arrhythmias can precipitate Seizures . ? Abnormal QT syndrome ,cause VT / VF , resulting in cerebral hypoxia and Stokes Adam syndrome . Abnormal origin of coronary artery from pulmonary artery will be DD. On the other hand , GTCS can also precipitate cardiac arrhythmia. Since patient had aura preceding seizures and LOC, it can be presumed that HTCS is primary and arrhythmia is secondary. If ECG has been done prior to phenytoin, some other anti epileptic like Levipiracitam could have been chosen. The limb weakness may be due to post ictal paralysis. Needs cardiac evaluation, Electrophysiological studies, and angio .

Thanks you very much sir .

Dear dr xray and ecg is not available

Sorry for the delay sir......the images are now attached with the case.