Today my topic is on #Typhoid #Typhoid Fever #Fever problem.Most of the peoples are worrying about this I will try to give solutions. Typhoid Fever Typhoid fever is an acute illness associated with fever caused by the Salmonella enterica serotype Typhi bacteria. It can also be caused by Salmonella paratyphi, a related bacterium that usually causes a less severe illness. The bacteria are deposited in water or food by a human carrier and are then spread to other people in the area. How Do People Get Typhoid Fever? Typhoid fever is contracted by drinking or eating the bacteria in contaminated food or water. People with acute illness can contaminate the surrounding water supply through stool, which contains a high concentration of the bacteria. Contamination of the water supply can, in turn, taint the food supply. The bacteria can survive for weeks in water or dried sewage. About 3%-5% of people become carriers of the bacteria after the acute illness. Others suffer a very mild illness that goes unrecognized. These people may become long-term carriers of the bacteria -- even though they have no symptoms -- and be the source of new outbreaks of typhoid fever for many years. Homoeopathic remedies Baptisia is rated among the best Homeopathic medicines for typhoid fever with delirium. It also helps offensive discharge during typhoid fever. Typhoid fever with a sore, bruised feeling all over the body is treated most effectively with Homeopathic medicine Arnica. Muriaticum Acidum is the best medicine for typhoid with involuntary stool and deep sleep while Arsenic Album is recommended as one of the best Homeopathic medicines for typhoid with marked exhaustion, anxiety and restlessness. 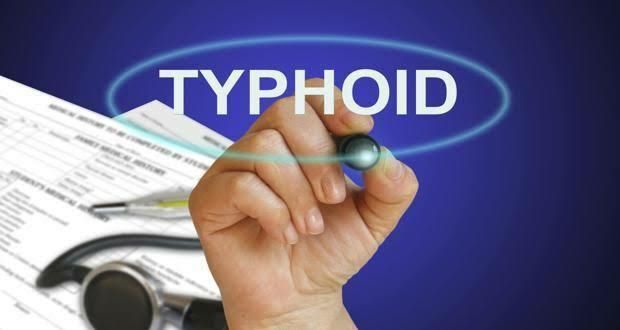