Type B Insulin resistance syndrome is an autoimmune disorder characterised by production of antibodies against the Insulin receptors, which leads to disorder in glucose metabolism (from hyperglycemia to hypoglycemia), extreme Insulin resistance, Acanthosis Nigricans and hyperandrogenism. Treatment with prednisolone and azathioprine was initiated for 6 weeks, in the patient displayed in the slide. There was normalization of blood glucose, Insulin and Testosterone levels, and clinical improvement of Acanthosis Nigricans (panel C & D). 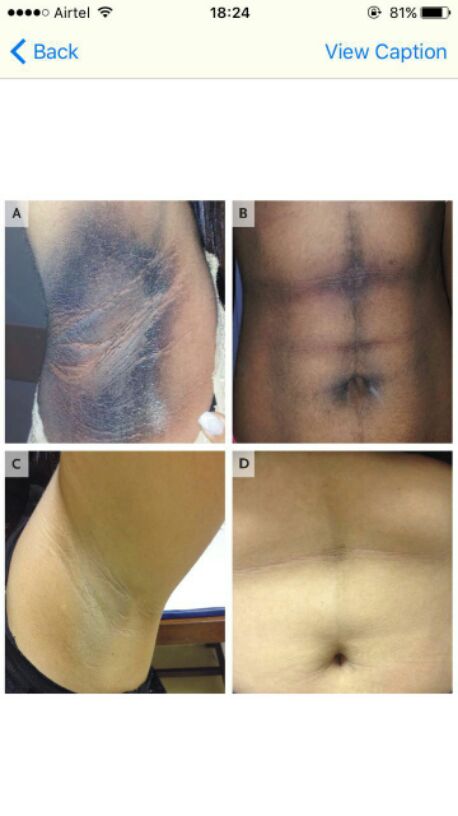 Wonderful post on Type B IRS. Insulin Resistance Syndrome. This is an autoimmune disorder, with Antibodies against insulin Receptors which may lead to Dysglycemia like Hypoglycemia or Hyperglycemia. This is associated with severe IR, Acanthosis Nigricans& Hyperandrogenism. This is responsive to immunotherapy. There is a case report where a 55 yr old female with ILD was treated with Steroids and her blood sugar levels went abnormally that she required more than 33,000 Units of insulin a day IV. Still not controlled, then they initiated Prednisone 60 mg TID and the blood sugar levels were maintained for a week and after withdrawal again went back to pavilion. Finally plasmapheresis was done to her. This is an example for Type B IRS. This Syndrome belongs to group of extreme IRS which includes Leprechaunism Rabson Mendenhall Syndrome. Lipodystrophy. This is a rare disorder which occurs in the middle aged adults, predominantly females. The onset of disease usually marked with a rapidly progressive Non ketotic and severely insulin resistance DM along with AN and Hirsutism. Paradoxal hypoglycemia occurs some times. Characteristics of IRS is presence of anti Insulin receptor autoantibodies. Wonderful pictures showing before and after therapy. Classical pictures, thanks Dr Parvez. 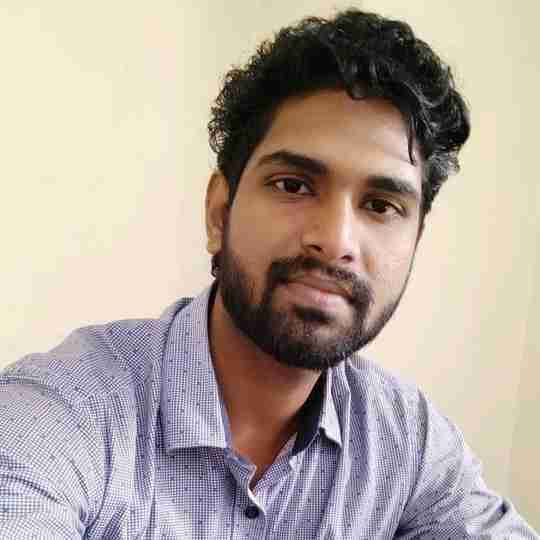 thnks krishna sir for the information

absolutely agree with Dr Parvez sir.. these are rare case reports. even I had seen a pt where we have him around 50units/hr iv insulin along with many BOLUS doses of regular insulin around 2500 units per day requirement and still sugars were above 400. unfortunately pt was not satisfied with the treatment as sugars were not coming under control and took discharge and we couldn't follow-up the case.

Firstly I will b failing in my dity if I gratefully acknowledge the wahe up call by Dr Krisna Mohan., Than q sir for the same.,as I am fully engrossed in house renovation work at the moment. That is not an excuse to take shelter in. secondly I also acknowledge Dr Parvez's tequest to come out of coma, in foot steps of ealier call to overcome insulin shock. Both shock and coma were in reference to self if ever it is , it is an assault on myself, not on anybody. cutting joke on self is a sense of humour and tealisation dawned on me that it shoulld not be displayed when opposite parties lack receptivity and appreciation of that finer art of humour. Of coutse u nevr know the dephth of (troubled) water till u step in.So much for the empty rhetoric. Firstly I beg to dis agree with Dr Parvez that being rare no studies of any sort would be available for the type B IR resistance. Since Type B is invariably associated with other auto inmune diseases (the list of which is increasing, with latest report on Helico bacter pylorii infection), A SEARCH for type B IR in this direction would make it possible to offersufficient number of studies and in fact steps in this direction were already taken, the onus of burden of enearthing such studies is with those who suspect it.Under the known set up of an existing autoimmune disease, when insulin requirement exceeds say 300 u / day it is prudent to suspect a type B IR in a diabetic whose BS was under control b 4 the acute disturbance characteristic of Type B IR and order the antibody test to insulin receptor than increasind blindly the insulin dose to elephentine doses, especially now a days when awareness ro Type B IR increased. Doing the otherway ie bulding up doses to E... levels and then coming to senses and ordering antibody test.If it is contended that they have good sense in doing this testing beforehand, it is unpardona ly foolish to build up insulin doses than instituting the rt treatment for Type B IR. If anybody has pleasure in doing the hard way, y r most welcome. Supports of such inintilligent approach r also doubly welcome. Quoting such artical in present day senerio is only encouraging the alternate hard way quoted above. Condemi g such approach purs the matter on healthy and much wanted and correct approach. The choice is left to supporters. How truely my presumption that discussions on urofy r a caduality and often end in regmorale.,and I am not going to be a party to such tigmorale any longer. Remembering to my self the story of "The monkey and glow worms" told my grany and realising how true the truth of the story , I beg to take leave of my mentors in internal medicine and endocrinologists being a humble back bencher dermatologist. Regards 2 one and all .Sorry for ttypos, for I oll afford verifing same , my valuable time. Kindly bear with them and ME ..2.

Hope the below abstract clarify the doubts. Abstract OBJECTIVE: To document a case of type B insulin resistance syndrome associated with systemic lupus erythematosus. METHODS: We present the clinical course of a female patient with type B insulin resistance syndrome, from the onset, diagnosis, and empiric treatment until remission of her disease. RESULTS: A 40-year-old African American woman with systemic lupus erythematosus presented with a relatively acute onset of severe hyperglycemia in January 2004. Her hyperglycemia was resistant to treatment with high doses of insulin (up to an equivalent dose of regular insulin of 4,500 units daily). The diagnosis of type B insulin resistance syndrome was confirmed after her insulin receptor antibody was found to be strongly positive. The patient's hemoglobin Ale level improved substantially after she had been treated with azathioprine for 3 months. By November 2004, she was able to discontinue insulin therapy. Repeated insulin receptor antibody testing in February 2005 revealed that her insulin receptor antibody had become negative. The patient's fasting glucose level became normal, and only occasional mild postprandial hyperglycemic episodes have been noted. CONCLUSION: Immunosuppressive therapy with azathioprine seems to be responsible for our patient's remission of type B insulin resistance, although the possibility of the occurrence of a spontaneous remission cannot be completely excluded.

Dear Prasad, Please come out of insulin shock. Reference is provided for your kind perusal. With regards, Sepuri Krishna Mohan. 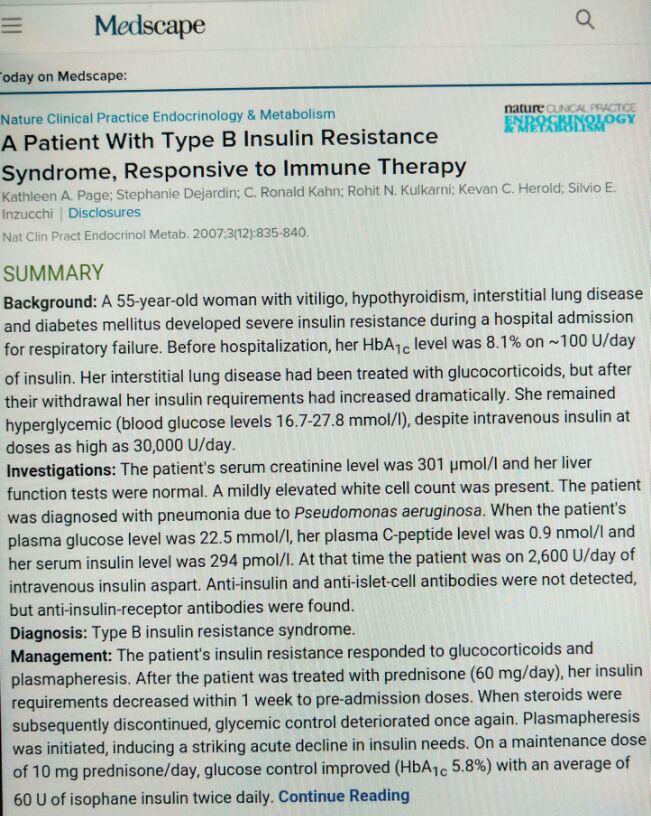 Krisnamohan sir .Thank u 4 ur ref. The range of BS was 17 to 27 mollimols. say 20 m. mols it is (2018) 360 mg/dl. If for such BS level if u think that they would have really tried upto 33000 u of insulin/day, in my opinion it is a crime.just a matte of commonsense. I Do'nt take such teports as gospels but always would with a pinch of salt. So the truth is left to one' soul searching if it is ever done. Ref wise u r correct but such controversial quotes in my opinion are better eschewed. so all takers of the verosity of the print I sincerely congraculate. so the lesson of the day (or night?) 4 me is that y can go upto doses of 33000 u /day of insulin if the case watrents. It is not a crime. we have a precident. Ur call sir did the magic, sir., I came out of insulin shock but landed in insulin coma. God only should help me., or the author of the report. Thank u sir once again 4 showing Common sense is nonsense and nonsense is good sense. Meant not to hurt any one. Just like love and war, everything is fair in a discussion, no matter even if one refuses to part with his fort . Discussions are a casuality on curofy. They end in rigmorale.

Abstract In type B insulin resistance and acanthosis nigricans, the insulin resistance is due to the presence of anti-insulin receptor antibody 1. Approximately one-third of patients with these antibodies have an associated illness such as systemic lupus erythematosus (SLE) or Sjgren's syndrome. This report describes a case wherein the patient had presented with uncontrolled diabetes and required > 3000 units of human insulin to control hyperglycemia. She also had features of SLE. There was complete recovery following treatment with steroids. http://www.ncbi.nlm.nih.gov/pubmed/20374339

Dear Prasad, Time to wake up and respond

I am still on wait for reply from Dr Parvez and Dr Krisna Mohan sirs for my rejoinder to the former's abstra t posted above. I feel it my duty to further straighten the matter under consideratin. The case quoted is not a prospective or retospective study of considerable sample size but is just a reporting of a rare case (case rrport) whose veracity is questionable. The deference between aim and objectives is thin. The Aim is presenting an interesting case of....so and so. where as the author presents the same as objectives (technically used for a studuy).likewise material and methods are irrelevant to the theme of presentation. so is the Reslts part. The conclusion is far reaching in view of sample size (N=1) that spontaneous remission is possible which means accepting that the remession could be spontaneou . Use of a drug other than tegular insuiln and concludibg it'potency interms regular insulin is make believe at the best. Tons of( not glucogon) such papers could b produced in notime and publication of such "stuff" is not difficult in view of price tag by the journals ( Don't mean mediscope) for "Encoiraging" such publications. There is discount for papers coming from underdeveloped countries. It is not difficult to asess the authencity of a paper if such exercise is undertaken atall. The paradox is all published dsta point out unanimously the hypoglycemic effect (except few case reports like the two 33000 and 2400 u) which report as insulin resistance (exact opposite).The reason for the reported hypogycemic effect is postulated as being due to the antibodies to INSULIN RECPTOR BEING COMPLIMENTARY TO INSULIN ENHANCING INSULIN EFFECT (THUS HYPOGLYCEMIC EFFECT) RATHER THAN IR requiring large (elephentine)doses of insulin As such the reports claimg tequirement in tens of thousands is an criminal act which could be fit for legal recourse. it is a foregone concusion that that the clarification would not be appreciated even by a single Curafian and is against Curafy tradition, customs and protocals. A good task done is itself rewardind-a sort of self satisfaction which I had in plenty. so Curafianspl skip this if u have not already done.

Yes. It is available as case report or you can get reference from Dr. Mohan.

No where in the article it says Insulin X. It says high doses of Insulin up to 4,500 units of Regular Insulin was given. Type B Insulin resistance is a rare disease. You cannot have Prospective RCT on rare disease, except literature review on case report or case series. If you have any references to counter the above article, why don't you provide for discussion, instead of continued to be happy in comatose state ?