Introduction:- It is a type of skin disease in which blotchy eruptions appear on the skin that remains erupted little. These eruptions are red in appearance and sometimes, they are also light appearance compared to the skin colour. In this disease, patient feels itching or burning sensation, pain like sting on the skin. This disease occurs suddenly and is cured by itself after few days, but sometimes it can persist for several days too. It occurs due to exposing to cold, constipation, taking spicy, heavy foods and eating crabs, fish, etc. Use of different drugs in acute uritcarea (nettle rash, hives):- 1. Apis or Chlorelum- If red, yellow or light colour (colourless) blotchy eruptions have appeared on the skin with burning and itching sensation, Apis should be taken. If Apis 1x, 3x or 6 makes no impression within 2 days, Chlorelum 3x should be taken. If this disease has occurred due to exposure to cold, taking this drug is appropriate. This drug should be used at an interval of every 8-8 hours. 2. Artica urens- If blotchy eruptions have appeared on the skin with pain like sting, Artica urens 3x should be taken at an interval of every 4-4 hours. If the patient has been suffering from profuse urination too with such symptoms, he should take Apis. 3. Aconite- If the skin has become dry due to cold or much dry air, fever, over thirst, restlessness, nervousness persist, etc., Aconite 30 should be taken. 4. Arsenic- If burning and itching sensation take place in the blotchy eruptions, he remains restless, feels over thirst, but drink little frequently, etc., Arsenic should be used. If any other disease or croup cough has occurred due to suppression of these eruptions, taking Arsenic 30 is very useful. 5. Antim-crude- If these eruptions have appeared due to constipation and the tongue has coated with white coating, etc., Antim-crude should be used for its treatment. 6. Dulkamra- If acute urticarea has occurred due to wetting, moist or exposing to cold, etc., taking Dulkamara 6 or 30 is very useful. 7. Bryonea- In this disease, if eruptions have suppressed without appearing completely that causes heavy breath or pain in the chest, using Bryonea 30 is very effective. 8. Pulsatilla- If such eruptions appear on the skin with loose motions in the morning due to taking heavy and spicy food in the last night and the condition of the patient becomes too serious, etc., Pulsatilla 30 should be taken to cure such symptoms. 9. Rhus-tox- If these eruptions have appeared on the skin with violent itching and burning sensation in them, the skin has turned into red with swelling, fever, feels over thirst and symptoms of disease aggravates by cold, etc., Rhus-tox 30 should be taken. 10. Nux-vomica- If this disease occurs due to taking alcohol, taking Nux-vomica 30 is beneficial. Chronic urticarea- 1. Astecus-phluviyetilis-  This drug acts better especially in this disease. If these eruptions have appeared on the entire body with the feeling of itching sensation, 6 potency of this drug should be taken at an interval of every 4-4 hours. 2. Sulphur- If such eruptions have appeared on the skin with itching sensation especially after going to bed, etc., taking Sulphur is beneficial in such symptoms. 3. Arsenic- If the patient feels weakness in this disease, burning sensation on his skin, the tongue has turned into red, feels little thirst (scanty), etc., Arsenic 30 should be taken in such symptoms. 4. Natrum-mur- If the patient suffering from chronic urticarea has the complaints of constipation, the face is dusty and blood has become cold, etc., Natrum-mur 30 should be used to remove such symptoms of the patient. 5. Skucum chakra- 3x potency of this drug should be taken in this disease. It helps to cure it soon. The mother tincture of Strauphenthus:- This drug is used in the treatment of chronic urticarea. In fat people, this disease occurs due to swelling of the mouth, scanty urination, heart disease, less systolic pressure due to heart weakness, etc. thus, 6x potency of this drug should be used to cure such patient. 5 to 10 drops of this drug should be taken thrice a day. 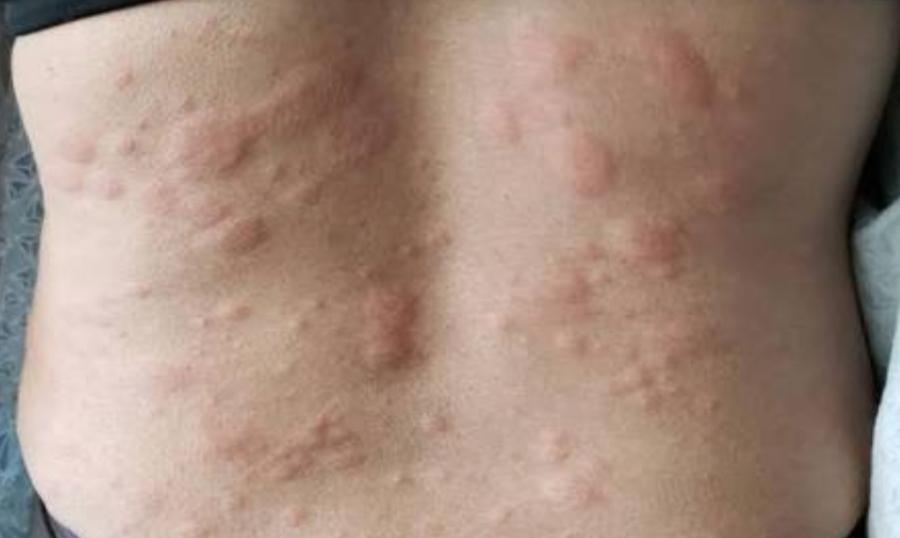 COVID-19 Trends of the Dayskin related issuesDiagnosis and management for this ear condition?Answers for DenTest QuizINFECTED Tooth between infected tooth 🦷 white circular spot Spot Diagnosis?What's the management of adequate liquor at the age of 18 weeks in primo gravidaHistory of drycough aggrevated during night. chest xray normalLesion over upper chest. Diagnosis and management?LEFT LEG PAIN